What Is A Thermostatic Expansion Valve? 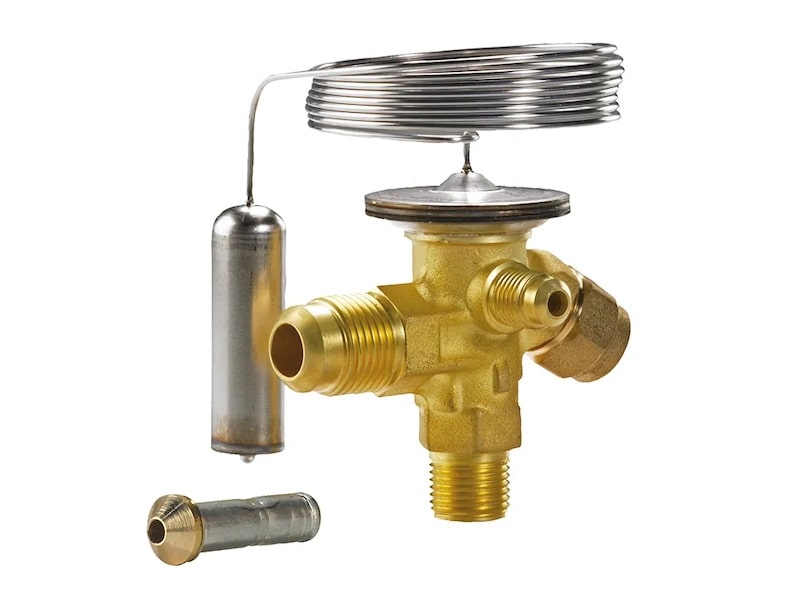 It is a precision device used to control the refrigerant’s flow injected into the evaporator’s systematic conditions, which is based on the outlet temperature and pressure of the evaporator, known as the superheat.

What Are The Main Components Of A Thermostatic Expansion Valve?

There are several components involved in making a thermostatic expansion valve capable of achieving the desired efficiency.

The body of the throttle comprises the main parts and an orifice that works to regulate the refrigerant’s flow into the evaporator.

Furthermore, the TXV also consists of a diaphragm, a flexible material that flexes to exert pressure on the operational pin.

This operational pin moves up and down, causing the orifice to vary in size, thus controlling the amount of refrigerant flowing into the evaporating system.

The TXV also has a spring working in the opposite direction of the pin in order to counter its pressure.

Additionally, there is a sensing bulb whose function is to measure the refrigerant’s temperature at the exit of the evaporator, reacting to determine the opening and closure of the valve.

How Does A Thermostatic Expansion Valve Work?

Reacting to the latter, the sensing bulb’s temperature gets the same as the refrigerant, which eventually increases because of the early vaporization of the liquid refrigerant.

When the temperature of the sensory bulb increases, it moves to the diaphragm through the capillary tube, causing it to move downwards, thus allowing more refrigerant to enter the evaporating system.

However, the pressure exerted by the feeler bulb on the diaphragm is balanced by the evaporator pressure and the spring, which constantly work together until the diaphragm’s desired pressure equilibrium is finally achieved.

When the load is finally decreased in the evaporator, the refrigerant flowing into it decreases as the excess liquid gets injected out of the coil through the outlet.

The latter cools down the sensing bulb, thus lowering its pressure and temperature, producing a cooling effect.

This low pressure and temperature then cause the diaphragm to move upwards again, thus reducing the size of the valve’s opening which minimizes the amount of refrigerant flowing into the evaporator.

What Are The Main Functions Of The Thermostatic Expansion Valve?

Like any other valve, the TXV also has a pressure drop, separating the higher pressure side from the lower one.

It easily meets the requirement of changing loads on the cooling system.

For example, if the load increases on the refrigerator, the TXV modulates itself towards a wider opening.

Similarly, if the load decreases, the valve returns to its original size.